Unrequited love, probably a path to self-destruct ourselves; yet we accept it willingly. Maybe our quest for love is undying, but the epitome of unrequited love is filled with pain, voidness.

Love, such a blissful emotion has the power to move countries, yet it wrenches the guts of the people and freezes the moment when the love of our life passes by, especially for few people. It sounds weird. But not for unrequited lovers.

Actually what is unrequited /one-sided love,

Let me tell you a story,

Here the boy was in head over heels love with the girl, (but he wasn’t aware of anything about the women, other than her name), maybe he was fascinated by her beauty or maybe she was the one in her life or maybe love at first sight but the admiration for her never faded away and as days passed it grown even stronger and he was so persistence for his beloved admiration, which always resulted in pain, yet he never shattered, although technically he does but still continued.

In this case, his love is non-reciprocal and not getting any affection or sometimes the beloved may not even be aware of the admirer's deep and strong romantic admiration, yet at dusk, his eyes and soul were filled with love hoping to see her beautiful face again (which he was unable to let go off) . Although the complete scenario may seem weird, it was just a normal heart questing for love, seeking admiration and affection; maybe the approach was wrong; anyways who are we to judge.

Probably that’s how unrequited/one side love works I suppose.

In this kind of love, the beloved may not even be aware of the admirers' romantic affection or consciously reject it. 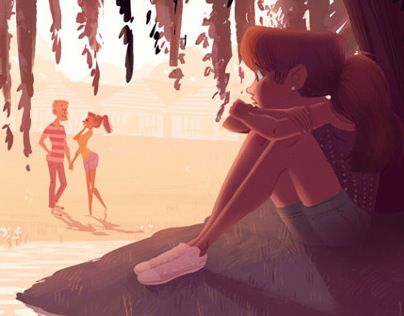 However, that’s only one side of the coin, yes agreed there is unconditional love, but it isn’t anybody que to be loved back and in the process of continuous persuasion occasionally it makes you depressed, sometimes makes you psychopathy.

Agreed, unrequited love can be a pain in the ass, but that shouldn’t decide your road to the future, although you can burn it to the positivity in your life.

Let's See If You Can Match "We Were On A Break" And These...

If I say "Doh!" you say The Simpsons. View Entire Post ›

Pick A Bunch Of Food For A Halloween Party And We'll Guess...

The only thing we have to fear is fear itself...and spiders. View Entire Post ›