let me tell you about some of the people that I came across (not met personally but heard them through a newspaper article) who are totally living their dreams and making everyone jealous..:-p.

Yes, I'm talking about them, the showbiz, where everyone is talking them. Droomcaravanchronicles, three people who set on an adventure journey to travel in a caravan from Bangalore to Delhi in 100 days. Three people, Ankita Kumar, Rohith Subramanian and William Meara, who basically are nomads/wanderers left the routine way of living life.

Ankita Kumar, who self-proclaiming herself as a travel monkey showcasing her adventures through her website MonkeyInc and making us envious of her travels. Ankita, with an intention to escape from the work she's having difficulty and with little enticement from someone, who just traveled to Vietnam encouraged her to lead such life. Thus she started traveling, since then she traveled many places. You may wonder how she is managing her expenses? Actually, she is a freelancer working as a filmmaker and some of her trips are sponsored by travel companies. In one of such travels, she met Rohith Subramanian, who guided her about sponsored trips.

Inspiration can be found almost everywhere and for this 24-year-old Rohith Subramanian, it was an article by 40-year-old American who regretted of not following his dream of traveling when he was younger and that made this nomad, lone wanderer, and TEDx speaker to travel. He then set himself to travel 46 countries in one and a half year on a motorbike and he successfully rode 35 countries in 2 years.  Actually, the idea of traveling in a caravan is first put by Rohith, who previously traveled to Europe, where he found many campers and campsites using caravans, inspired him to bring the culture to India.

William Meara, digital marketer, TEDx speaker, event manager and the investigative traveler is definitely having a life of his time. The Irish traveler who has been traveling around the world had experienced some tough situations in his journeys, but that didn't stop him the love he had for traveling. 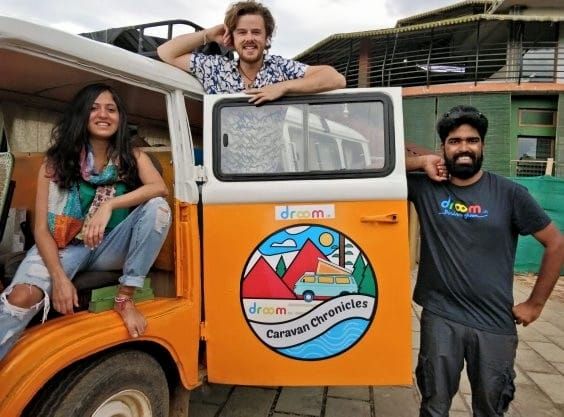 We are living in an era where people are spending for experiences rather than possessions and we believe travel is one such experience where many people are spending their money. It has become more than a rich mans affair, everyone is interested in traveling both domestic and International in India, especially domestic where people looking for offbeat places rather than regular tourist spots planning their trips through motorbikes and cars and with the initiative started by these guys can hopefully bring the caravan culture to India and we can see more of such travels and companies that encourage them.

If you are interested about their journey and want to follow up the updates of their adventures you can check it out here Droomcaravanchronicles.

Live your life a memorable one, create your bucket list and fulfill your dreams....

Created by Dan Fogelman, "This is us" is a must watch family drama series. The story...

The Best Music Festivals in India, where everyone should visit at least once in...

Music has always been an integral part of humankind. According to the Concise Oxford,...